The Hand-Stretched Noodles at Yu Noodles 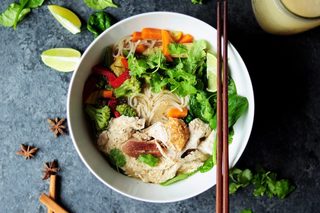 You can probably guess from the name what Yu Noodles is known for. That’s right—it’s the hand-pulled noodles. They’re the foundational ingredient for most of the eatery’s popular dishes, including the Sichuan beef noodle soup. This spicy dish starts with a broth infused with soy sauce. The noodles flow into the broth alongside beef chuck, star anise, ginger, yu choy, and spicy bean paste.

If you’re feeling particularly adventurous, the classic Chongqing noodles are even spicier. The Chinese characters that commonly describe this dish roughly translate to “spicy, umami, and numbing,” so you know the noodles aren’t for the faint of heart! The boiled noodles swirl in a savory broth with preserved veggies and roasted peanuts. If you’re in the market for a milder dish, try one of the traditional Chinese entrees such as the minced pork and rice, the pork soup dumpling, or the potato tower. If you’ve never savored a potato tower before, it’s definitely worth your time! The authentic dish features a bold mix of spicy flavors thanks to accouterments such as tomato, plum, and coconut, which bathe the stack of crispy potatoes in salty-sweet deliciousness.