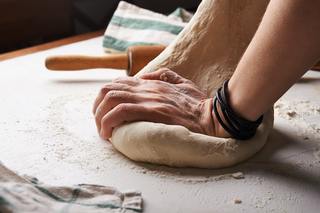 You’ve probably heard of Neapolitan-style pizza and Chicago-style pizza, but what about Detroit-style? This Midwestern take on the Italian classic is all about the crust. Pizza chefs craft a thick but airy crust using a base of focaccia bread, which cooks up in combination with the cheese to create crispy, caramelized edges. The chef only adds the warm sauce after the crust and toppings have baked to a golden brown, laying it up and down the rectangular pie in “racing stripes.” If you haven’t tried a Detroit pie yet, come to Reston’s new Little Beast eatery ASAP.

The restaurant specializes in Detroit-style pizzas—most of which also feature traditional Wisconsin brick cheese. The simple cheese and pepperoni pies both showcase the Wisconsin brick with provolone and mozzarella. For something with a little more flair, try the Motown topped with meatballs and pepperoni, caramelized onions, roasted red peppers, banana peppers, and a spicy chili-garlic relish. Prefer to go meat-free? The Greenfield Village pizza sports artichoke, kale, mushrooms, black olives, and roasted red peppers. You’re also welcome to build your own pie and pair it with a local craft beer or a seasonal cocktail at Little Beast.